Celso has been for many years travelling national & internationally to schools,  libraries and culture centres. There he meets children and do with them traditional songs and dances from Mozambique, Zimbabwe, South-East and West Africa. These musical encounters are a great occasion to interact and to share experiences musicians from other cultures.

He also performs on stag, does music workshops and studio recordings with younger artists.

Storytelling with music  for all ages

A trip to Africa's hot savannah is provided by Celso through his storytelling. The audience get to meet wild animals, several kings and wise peasents.

Due to the melting tons of a variety of african traditional instruments, the stories gain a higher dimention, taking the listeners to an unforgetible journey without leaving the room.

Beside working as a solo artist, Celso tells stories. The audience has the opportunityto try the instruments and ask questions about them and about the Mozambican culture in general. (Photo: Storytelling at Svanneke garden, in Bornholm) - Taken by Mette Zacho

Since childhood, Celso has continuously being exposed to traditional songs and dances from his mother land and from the neighbouring countries, Zimbabwe, South Africa and Tanzania.

This contributes to the rich reportoire that he carries within. He is happy to share it in forms of  workshops and live performances.

Live on drum-set and a variety of Percussions

Drumset is Celso's main musical instrument. He has been playing it in a professionally bases meaning that most of his studies were based on live  perfomances, studio recording with well known artists since the age of 14.

Celso plays drums with confidence and stability to many kinds of music styles such as Afro, Jazz, Pop, Rock, R&B, Reggae, Waltz, Latin and all others. He is constantly on great demamd even as a percussionist. (Photo:Live at Hijazz with Manluckerz & Zim Traditional Unity and guest-artist Hope Masike in Uppsala) - by Sérgio Santimano

A great opportunity for Celso to present a variety of musical instruments  and tell stories from his home country. (Phto:Playing mbira under storytlling Leorpas Drum with Spektrum choral group). 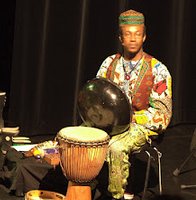